The Candler Hotel: Atlanta’s Most Sophisticated and Historic Place to Stay and Dine 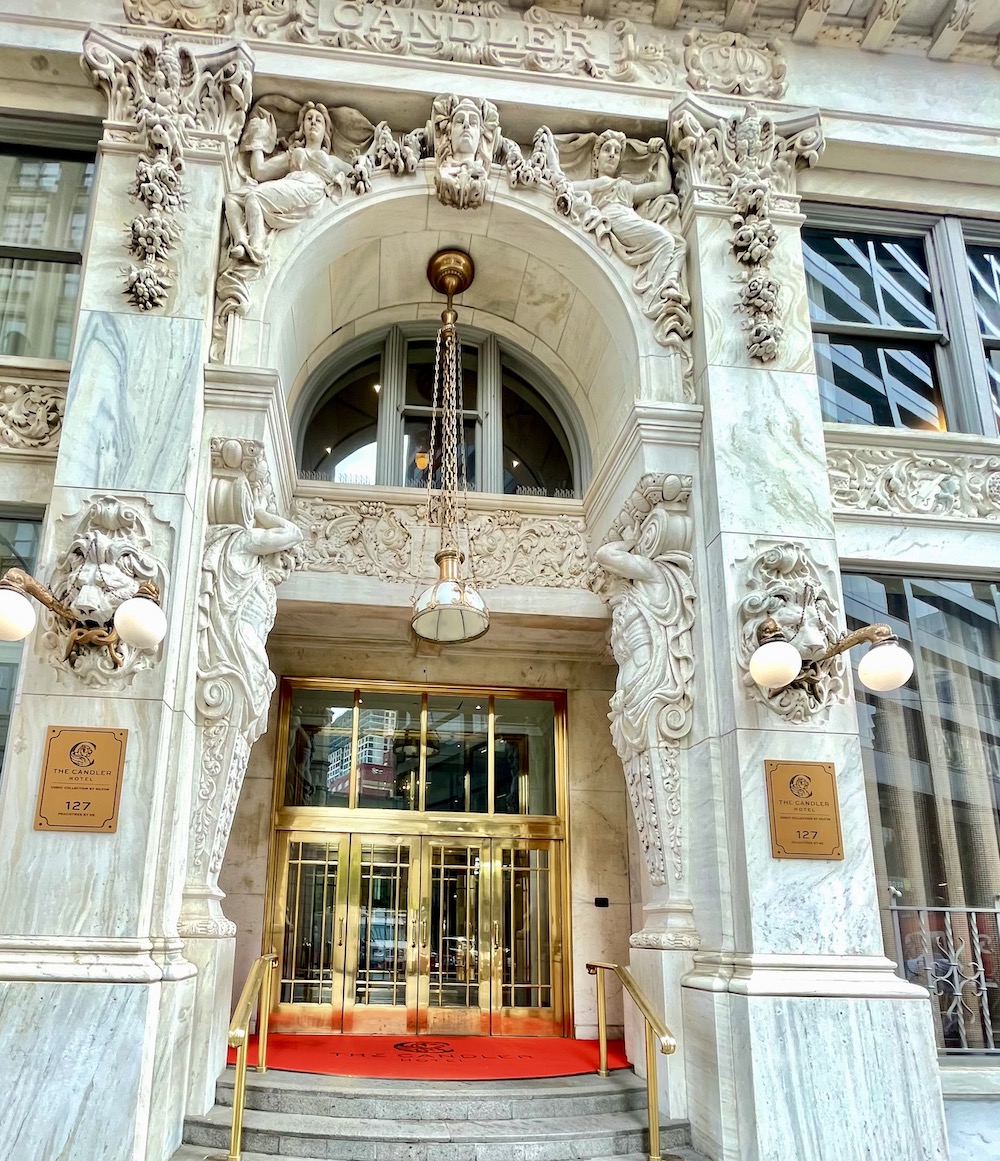 Listed on the National Register of Historic Places, The Candler Hotel (known by Atlantans for many years as The Candler Building or even the Coca-Cola building) is beloved for its carved marble, Corinthian pillars, and Art Deco features. Its location on Peachtree Street puts the hotel near attractions such as Mercedes-Benz Stadium, the Georgia Aquarium, and the World of Coca-Cola.

It’s hard to imagine a hotel more elegant than The Candler Hotel, housed in a Beaux-Arts style building from 1906 and made of Georgia marble literally floor to ceiling.

The location in downtown Atlanta makes it an ideal homebase to explore the nearby attractions – or as a glamorous staycation for locals.

Consider this fun fact: Coca-Cola founder Asa Candler helped design the structure himself and ran his iconic company there before moving to midtown…AND, the secret formula for Coca-Cola was housed here in a safe – which guests can visit (more on that later.)

After decades when the building was home to a bank and other offices, it was redesigned and reopened in 2018 as a boutique hotel through Hilton’s Curio Collection.

We checked in at 4 p.m. on a Friday, and true to its reviews (the hotel is ranked #1 on TripAdvisor for Atlanta), every person from the valet to check-in clerk to manager was so friendly and helpful.

Cookies and water are available in the lobby, but even better, guests are greeted by a lovely woman making peach cocktails. This champagne cocktail – flavored with some peach puree as a nod to Georgia’s famous fruit – is just the right refreshment to sip on while wandering through the impressive first floor.

All 265 guest rooms have been completely reconfigured as modern bedrooms with a touch of Art Deco mixed in. Bathrooms have tile floors and a pink-marble vanity, continuing the theme of bygone elegance. And for anyone who’s recently stayed in a new hotel with paper-thin walls, rest assured that the thick walls and plush carpeting of an older hotel provide a quiet advantage.

Sign up at the front desk for a tour of the hotel given by one of the affable staff. You’ll take marble stairs up and down to view all the original architectural features – from bronze mailboxes to carved water fountains to Tiffany windows, and you’ll find features from previous decades.

The basement floor was originally built to accommodate businessmen (no women working back then), with shoe-shine stands, a 15-chair barber shop, and even Roman baths.

It’s now home to a fitness center for guests, with other areas of the hotel dedicated to small meeting rooms and larger ballrooms for weddings and the like.

Your guide will take you through the working kitchen – always fascinating in itself – to see the actual bank vault from olden days.

Yes, this is where the secret Coca-Cola recipe was kept for years, and they have it properly styled with Coca-Cola memorabilia as a nod to Atlanta’s most famous corporate citizen.

There’s a table and chairs set up inside the vault, ready for a new phase offering chef’s table dinners in this storied area.

Speaking of meals, the hotel’s in-house restaurant By George (serving breakfast, lunch, and dinner, with a swanky brunch on weekends) is such a special part of the Candler experience.

Banish any stereotypes of bland hotel restaurants. The first-floor location of By George was once home to the Central Bank and Trust (which merged with C&S Bank and then Bank of America), and still has the massive marble columns and picture windows looking onto Peachtree Street from the days of glamorous banks.

James Beard-winning chef Hugh Acheson stepped in to lend his culinary skills and name to the restaurant, choosing a contemporary American menu to please a wide variety of patrons.

Popular favorites such as shrimp and grits or roasted chicken and vegetables are given an elevated touch, and the eatery is particularly popular for weekend brunch.

The restaurant’s sophisticated bar should be a first stop, with custom cocktails and an impressive wine list. If the setting at By George looks familiar, it’s because Hollywood has taken notice.

With Atlanta’s popularity as a TV/film location, the hotel and restaurant can be spotted on such popular recent hits as “Ozark” (standing in for a Chicago restaurant) and FX’s “Atlanta,” with some top-secret projects coming soon.

When it’s time to explore downtown, the hotel’s location not far from the attractions make it a good choice when heading to an Atlanta Falcons game, the World of Coca-Cola museum, College Football Hall of Fame, and Centennial Olympic Park. But the biggest treat will be returning to this elegant hotel with its smiling staff and beautiful design to welcome you in, such a civilized nod to history and the golden age of architecture.

– Photos and story by Lisa Mowry

The Travel 100 participates in affiliate programs with various companies. We may earn a commission when you click on or make purchases via links.

Inn-side Story: Luxury Resort in Virginia on the...

The Inn-Side Story: The Reserve at Hot Springs