Cold beers and a warm firepit are a perfect combination at Frazier's Tavern. (Photo by Sam Dean Photography)

Whether you’re spending the day zooming down the slopes at Beech Mountain Resort, hiking on some of the 30+ miles of trails, or mountain biking on the Emerald Outback, you’ll be looking for great food during your trip to Beech Mountain. We’re sharing our favorite Beech Mountain restaurants in this North Carolina town in the Blue Ridge Mountains.

Okay, I confess, I neither skied nor mountain biked on my trip to Beech Mountain in the fall. But we did hike on trails with gorgeous views, visited the Buckeye Recreation Center and took the ski lift up to the 5506’ Skybar where we enjoyed gin drinks and took in the incredible views.

Oh, and then there was the day we went biking through the mountains, to be more specific, down the mountains to Banner Elk Winery. We spent the afternoon drinking delicious wines with Lisa Koch, the business manager, who introduced me to watermelon jalapeno sangria and a blueberry wine I actually loved.

But whatever you’re doing during your stay, you’ll enjoy dining at one of these Beech Mountain restaurants. Please note: some places are seasonal or only open on weekends during certain times of the year. Always check the schedule before heading out to eat.

If you’re ready to get out of those hiking or ski boots and fancy up a bit, you’ll want to head to the Mountain View Room at this Beech Mountain favorite for fine dining. The views are magnificent, with five mountain ranges stretching over Tennessee, Virginia and North Carolina.

One side has a view of a meadow where deer sightings are common. During our stay at Beech Mountain, we spotted deer hanging out close to the street many times, totally unfazed by any cars passing by.

For a little lighter fare opt for The Old Fireplace Room, which has an open stone fireplace in the middle and serves a bar menu. Here the Mile High Club means large sandwiches, and you can also get burgers and chicken wings along with draft beers, fine wines and mixed drinks. When weather permits, take a seat on the patio and enjoy that fresh mountain air.

The restaurant is located in the Beech Alpen Inn, which dates back to the 1970s. 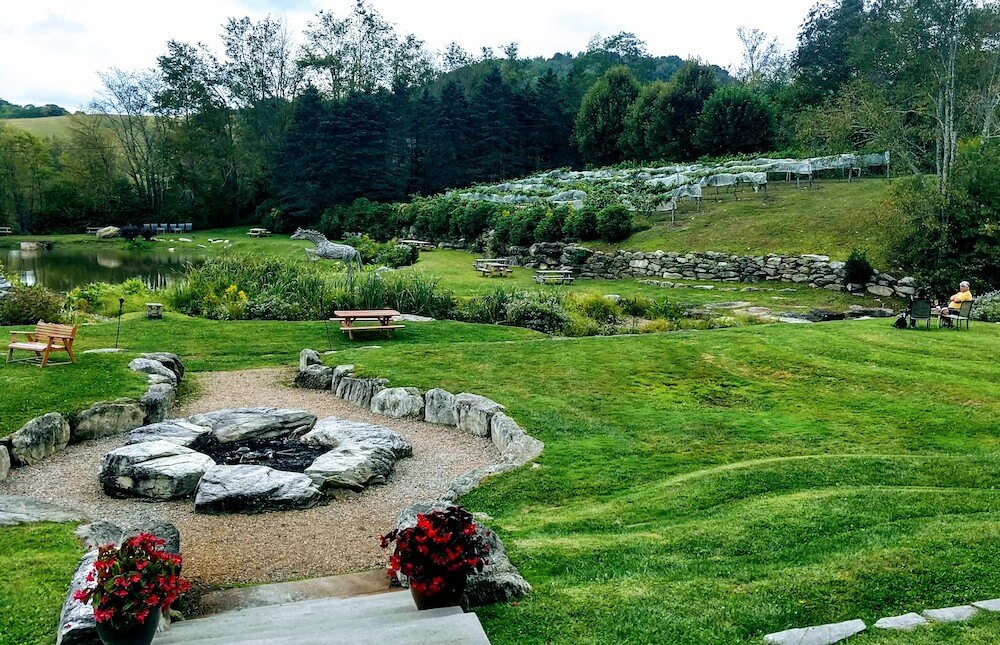 We spent our afternoon by the big stone fireplace inside at Banner Elk Winery, but the grounds are a lovely place to relax on a nice day.

Maybe it’s not technically a bar or a restaurant, and technically not in Beech Mountain, but I want to give a special mention to Banner Elk Winery.

While there are a few other wineries in the region, Banner Elk was the first when it was established in 2005. It’s won several awards for its wines made with grapes grown in its own vineyard as well as those of local farmers.

We spent several delightful hours there one rainy afternoon and I could have lingered longer by that huge stone fireplace. The wines are delicious, nice and dry just the way I like them. I was skeptical of the blueberry wine, but it turned out to be a delicious dry red wine with the flavor of blueberries rather than a super-sweet syrupy version.

Lisa told us the property used to be a blueberry farm, shared stories of the owners, the wine industry in North Carolina and how this area has been well suited to the French-American hybrid grapes they grow on property. She told us they made up the recipe for the jalapeno watermelon sangria. “We’re known for this drink because it’s so ridiculous,” she said. “We take our wines seriously, but we don’t take ourselves seriously. If it snows we wear onesies.”

Tastings are only $10 and it’s worth that alone to enjoy the cozy atmosphere inside or the gorgeous view and small pond outside.

Although we visited during the off season, you could tell this was the place to be during ski season at Beech Mountain Resort. In addition to the restaurant, this large lodge space hosts parties, late-night DJs and beer festivals.

Menu items include chicken quesadillas, beer cheese nachos, soups, salads, burgers and sandwiches. If you want a taste of something local, go for the trout, which was probably swimming in a North Carolina stream not too long ago.

You’ll find a selection of more than a dozen brews from local breweries and Beech Mountain Brewing Company next door, one of the few breweries in the U.S. operating in a ski area.

Dine in or take out from this casual restaurant that claims to specialize in American comfort food, located right across the street from Beech Mountain Town Hall. You’ll find music, TVs, craft beer and a full bar. In the winter enjoy a view of the ski slopes.

Food here is a little more upscale, with appetizers like baked brie, blackened tuna and sushi salad. You’ll find sandwiches and burgers along with entrees that include things like grilled salmon, shrimp and grits and meatloaf. 5506′ Skybar is named for its elevation. Try the Death of Dorothy. (Photo courtesy of Beech Mountain Resort, Sam Dean Photography)

The only way to get to 5506’ is by chair lift at Beech Mountain Resort. In the winter, you know everyone sipping a cocktail or enjoying a brew is either a snowboarder or a skier. But other times of year, guests can ride the chairlift up to enjoy the spectacular views.

During my no-snow visit in the fall, we got lucky as the rain cleared long enough for us to jump on the chair lift and make our way up to the top of the mountain. Even the member of our group who is scared of heights held on tight and made it to the top where we were rewarded with craft beers or cocktails served with a smile by the bartender Cam.

5506’ is adjacent to the Land of Oz attraction, only open a few weekends a year, and the inspiration for the Death of Dorothy cocktail. Cam gladly made one for us but said he couldn’t tell us the ingredients – it’s a trade secret.

There is a small snack bar and 5506’ also hosts yoga classes and live music during the warmer months. 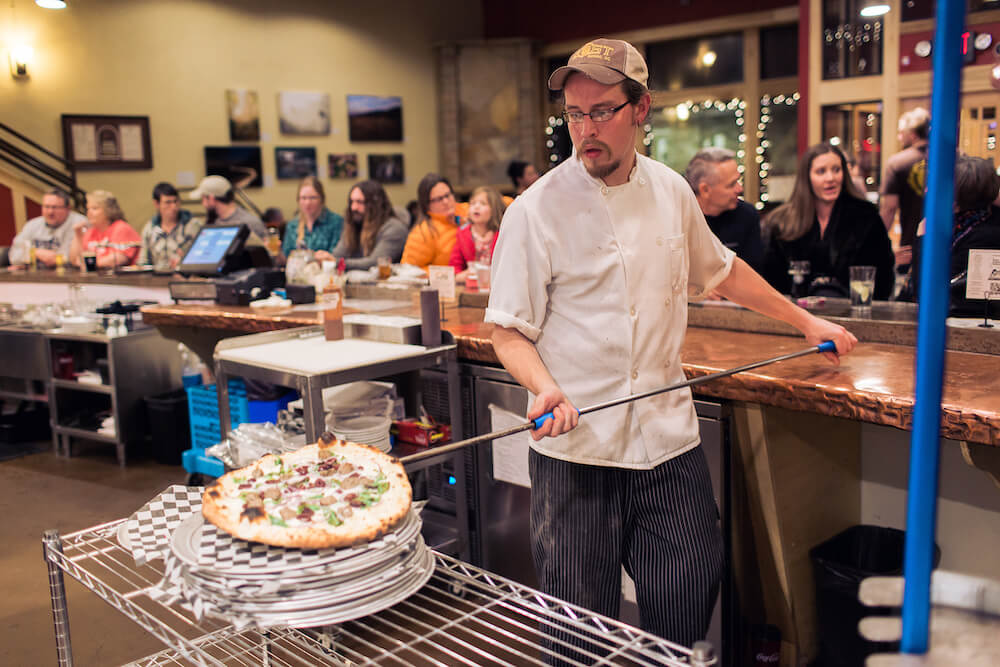 Pizzas at Brick Over Pizzeria are baked in a hearthstone over. (Photo courtesy of Beech Mountain TDA)

If pizza is on your mind, head to this casual family-owned joint with pizzas, cheese steaks, burgers, subs, pastas, wings, calzones and gyros.

We couldn’t resist adding a few of the fresh-baked cookies to our order. There are also hand-crafted candies to satisfy your sweet tooth.

Make it a night of fun by playing the arcade games and mini golf, located just outside the restaurant. Just grab a club inside and hit the course.

Get your hearthstone pizza here, located at the top of the Beech Inn & Conference Center. Check out the game on the large screen TVS, including one that’s 100” big.

Beer lovers will want to add this place to this list as it features the region’s largest selection of craft beers from North Carolina. Another uber casual eatery, it serves Nathan’s original hot dogs, burgers, wings and salads.

You can watch the game or play a game of pool at one of the tables in a front room. My favorite part was the outdoors fire bar, which featured seating around a long narrow fire in the front of the restaurant. We ate early so it was pretty much empty when we got there but packed with partiers by the time we left. I bought one of wooden birdhouses you can see on the far left at Fred’s Mercantile Store in Beech Mountain.

Housed in a super cute former home, Fred’s General Mercantile is the place to get everything in Beech Mountain. Its motto is “If we don’t have it, you don’t need it.”

Fred’s Backside Deli is located on the lower level of the three-level building. Like almost every restaurant in Beech Mountain, you order at the counter. In the morning look for breakfast sandwiches, waffles, bagels and large breakfast platters at ridiculously cheap prices.

Nothing on the menu is over $10 and Fred’s is open year-round. The dining room has a glass ceiling so you don’t feel closed in even though it’s on the lower level, and there are a few tables on a patio for when the weather is warm.

Also in the basement is a shop that changes seasonally – from a ski shop in the winter to a bird shop other months.

Be sure to save time to check out the merchandise on two levels of the store. You’ll find everything from T-shirts and candies to groceries and hardware items. I saw some cute birdhouses made of wood and jammed one in my car to bring home along with some tomatoes from the produce section out front. The pulled pork at Holy Smokes is some of the best I’ve ever had, earning it the spot of my favorite of the Beech Mountain restaurants.

My favorite place of all the Beech Mountain restaurants is Holy Smokes BBQ. And it’s not just because we started out the day with a tour of the property with the owner, Larry Watren, who along with his wife, Laura, is doing wonderful things to help abused kids and men with addiction.

Larry and Laura moved to Beech Mountain from Orlando, Florida, and bought a building that a bank was about to tear down. With lots of work, they turned it into a gift shop, fudge shop, restaurant and White Wolf Lodge.

The lodge has three apartments with killer mountain views and a large bunk area on the lower level where they can host large groups. They have hosted church groups and youth groups, mostly in the winter. His goal is to be profitable so he can help more people through their ministry.

He also excels at making excellent barbecue. I’ve eaten several tons of pulled pork in my life, and the pulled pork at Holy Smokes is some of the best I’ve ever had. Every time we passed by Holy Smokes we saw a smoker out front, where he smokes the meat for hours. Then rather than be content to pull off large chunks of meat and call it a day, Larry meticulously pulls and pulls and pulls the smoked meat apart until it’s a mound of such tender pork you won’t need a knife.

While I typically opt for pork when I eat barbecue, you can also get fire-braised chicken, hotdogs, pizza and even a potato or a pizza covered with pulled pork. Sides include baked beans, mac and cheese, coleslaw and four bean salad.

Their sauces are made in-house with the apple butter and North Carolina sauce being two of the favorites.

This Mexican place is housed in 4 Seasons at Beech Mountain. The menu includes Mexican favorites and margaritas.

– Jan Schroder, Editor-in-chief, has been writing about restaurants in the South for more than 20 years. She is the author of Murphy’s: 30 Years of Recipes and Memories Spectacular Beech Mountain Rentals For Your Next Mountain Getaway